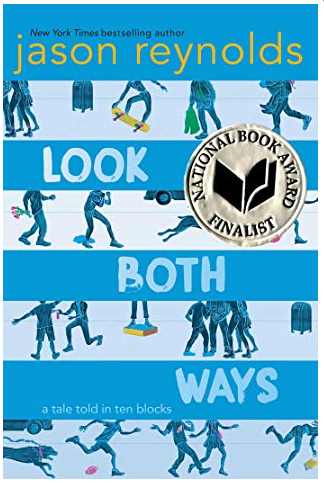 This book is a set of ten separate short stories, but the characters are connected; they all go to the same school. Each chapter is titled with the name of a street, and the stories are about the kids walking home to that part of the neighborhood. There are chapters about friends, bullies, family drama and first loves, all told through the eyes of young people. Some are laugh out loud funny, and others are heart breaking. On Placer St. we meet the the Low Cuts, four friends with many things in common including qualifying for free lunch, and parents who were cancer survivors. These shared experiences made them tough, yet we learn how leaning on friends makes tough times better. The stories capture the social lives of inner city middle school students perfectly. Verdict: a great book for middle school and the J Fiction section of the library. Friends play such a huge role in the lives of middle schoolers and this book focuses on those important relationships. 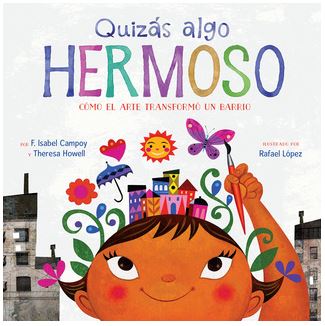 The story of Mira and her neighborhood was first published in 2016, in English. This Spanish version was translated by Campoy and released in 2018, and I prefer it hands down. While the collaborative, transformative message remains constant, the Spanish version delivers a precision of language that the English version lacks. In both versions, an enthusiastic muralist—who bears a likeness to the book’s illustrator—helps Mira color her world.

These are two of many lines that exemplify why the Spanish version is an improvement. In English, “Sky blue cut through the gloom,” “The wall lit up like sunshine.” In Spanish, “Un cielo azul apareció borrando la tristeza,” “La pared se iluminó como un amanecer.” The figurative diction of the translated line elevates the paint from a mere shade (sky blue) to an ally in the beautification effort—a notable improvement on a literal reference to paint. From an illustration standpoint, Mira’s colors resemble un amanecer, not sunlight. In either version, Mira’s confidence and creativity will inspire young readers to embrace their gifts by sharing them with the world.

Verdict: This Spanish language version is an improvement on the original. It is recommended for public, school, and home libraries.

In her debut picture book, illustrator Goodale uses ink, watercolor, letterpress, and digital collage to lovingly celebrate neighborhoods of Somerville (MA) through view into lighted windows as the autumn day fades into dark. A child in a red hoodie walks a little white dog as the minimal text muses on the sights before the mother waves to the child and then curls up with the child to read a story.

Verdict: Although the promo material refers to the child as male, the androgynous appearance of the child and lack of gender pronouns does not specify, making the book accessible to both boys and girls, and a child walking a dog is unusual—and delightful—in a picture book. The quiet thoughtful look at the child’s neighborhood encourages imagination about one’s surroundings. A comforting read-aloud or good-night book about discovery.

Manzano (aka Sesame Street’s Maria) tells this story of a city-dwelling immigrant family whose apartment is too small for their holiday tradition. “Mami” is frustrated because her roast is too big for the oven. She is nostalgic for Puerto Rico. In the process of finding a solution, which involves taking the roast to the local pizza oven to cook, the neighbors open their doors and the smell of the roast brings the erstwhile isolated urbanites out of their apartments and into our main character’s home to share the feast. It’s a story that’s been told before, of how food and ingenuity bring people together over the holidays, even people with very different backgrounds. This is a culturally-friendly book. It could be a chance for students to discuss their own holiday traditions and how they differ according to the traditions of their families. Two-time Caldecott Honor-recipient Marjorie Priceman’s colorful, fluid, and cheerful illustrations beautifully compliment the simple story of miracles found in unexpected situations. I recommend this as a wonderful addition to any teacher’s collection of books to read for the holidays with a diverse group of students.