Groups, pods, and huddles. This large format book captures the imagination of all involved in opening this adventure about living in a pack.  The illustrations of animals in large groups jump out at us, and with spare text, show us how and why moving, dancing, singing and building together makes the pack stronger. Every page engages young and old, but quietly sneaks in the real natural science information of why it matters to live in a pack.

VERDICT: What an amazing book! Highly recommended for all ages to understand why living together makes organisms stronger. In the back pages, there is a helpful species ID, too. The artwork is a vibrant journey all on its own. Wonderful. On the back of the cover, people bike together, which was great fun to tie us into the web of life. 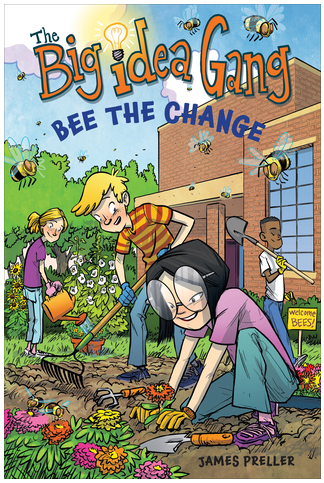 Kym and her friends go to see a beekeeper, Ozzie Johnson, his farm, the Bee’s Knees, and his farm animals. They put on hats with veils, bright yellow jumpsuits, and thick gloves so they can check out the bee hives. Kym and her friends learn all about taking care of bees. This book contains eleven short chapters and a table of contents. Illustrations include the life of a bee from the egg to adult bee. Through Ozzie talking with the girls, the reader learns facts about honeybees. Meanwhile, Connor and Devon are in Devon’s basement creating a comic book. They try to come up with their very own superhero, but are having trouble coming up with something original. Kym is excited about all she has learned about honeybees which inspires Connor. They began feeling the beginning of an idea…Kym wants people to understand honeybees and to like them. Connor wants to create a superhero. You will need to read the book to see how they collaborate so they both end up reaching their goals. Children often want to make a difference in the world. To make a difference, one needs to convince others that change needs to happen. The book contains tips on how to make a claim and support the evidence. This book is in The Big Idea Gang series.

Verdict: This short chapter book is great for readers who are interested in honeybees. They will learn many bee facts and caught up in the story as well.

It is exciting to go to Disneyland and Walt Disney World, but do you know the business story behind the Walt Disney Company? The Walt Disney Company is the biggest entertainment company in the world, but at one time, it was just an idea that two brothers, Walt and Roy Disney had. The chapters include: Walt Disney’s childhood, heading to Hollywood, how Disney went public, the magic of Disneyland, the Disney Brand, and 100 years later. Sichol explains how Disney started as an idea and turned into biggest entertainment company in the world. Includes world’s first business biographies for kids, a bibliography, fun facts, source notes, timeline of Walt Disney Company, and table of contents. Text boxes of Fun Facts and definitions are spread throughout the text. Even though the humorous illustrations are black and white, they match the text, add interest and keep the reader engaged.

Verdict: If you like Disney, you will enjoy reading how Disney created his business. Children will learn what it takes to start a business and how to persevere and not give up. If the pictures were glossy and colorful, they would attract the attention of readers more.

If you like crocodiles or want to know more about them, this is the book for you! Did you know that American alligators introduce themselves by bellowing? Through this growl, the alligator communicates its gender, location and size. Each page has a topic heading that is written in colorful bubble letters which sets the theme for the page. Each page includes a box that contains information emphasizing how crocodiles are similar to humans. The information is easy to read, yet the reader will learn a lot. Since each page has its own theme, the book does not have to be read from front to back, one can skip around to pages they are interested in. Cartoon illustrations along with photographs of crocodiles fill each page. The crocodiles have large round pop out eyes that make me smile. Crocodiles can be scary animals, but the illustrations make them fun. Contains a glossary and bibliography.

Verdict: This fun, informative crocodile book is sure to bring smiles to your face while teaching you a lot about crocodiles. If you are doing a unit on crocodiles or just like them, you will find this book valuable. Some books require the reader to have to wade through a lot of words to find facts, the facts in this nonfiction book are concise and easy to understand. I highly recommend it.

The book is a collection of biographies of 44 black people who shook up the world. Even though there are many more individuals who could have been added to the collection, ESPN, the parent company of The Undefeated, spent a lot of time crafting profiles of the most influential individuals. They chose 44 to pay homage to the 44th president of the United States and the first African American to hold the position. This is a collection of dreamers and doers which represent a symbol of pride and aspiration. From Richard Allen, founder of the African Methodist Episcopal Church, whose life span ran from 1760-1831 to current day Simone Biles, a gymnast who was born 1997. Other individual included are Maya Angelou, Jay-z, Michael Jordan, Martin Luther King, JR, Serena William, to name a few. This inspirational book will provide the reader with history of each person. Each page contains the individuals name, what they accomplished, their lifespan dates along with their portrait. The illustrations are created digitally in Adobe illustrator. A table of contents makes it quick and easy to locate the individual one wants to read about. The reader can pick and choose which page to read, the book does not need to be read from front to back.

Verdict: Short, concise and informative. I will be encouraging teachers to check out this book during February since it is black history month. This book features individuals with a wide range of talents. I chose the age of the reader to be 10, but if the book was read to an eight-year-old, they will be able to understand the content and learn from it. This book will appeal to young and old alike since it features such a wide range of individuals. I highly recommend this book for all libraries.

Legos are popular and fun to play with, but do you know how they were invented? Ole Kirk Christiansen, who was born in 1891, created the Lego, but it was not his first invention. He started out as a carpenter, made wooden toys and eventually invented the Lego. Christiansen’s life was not easy and he had many setbacks and tragedies. This book includes eleven chapters and a timeline of Lego, how Lego bricks are made, source notes and a bibliography. Text boxes of Fun Facts and definitions are spread throughout the text. Even though the illustrations are black and white, they match the text, add interest and keep the reader engaged.

Verdict: My kids played with Lego’s so I found this book enlightening and inspiring. Christiansen did not give up when various disasters struck, which shows perseverance and growth mindset. Readers will learn how items are created and realize that a perceived dead end may just be the beginning of a new invention. If the illustrations were in color on glossy paper, I feel that the book would be more popular.

Welcome to Drivedale, a town of colorful anthropomorphic cars and trucks that live happily together as they zoom around town. That is until a crash between a milk truck and a cookie cart bring traffic to a standstill. Tow Truck Joe knows just what to do, and several others jump in to help including the cement mixer, the bulldozer, and the grocery truck. In addition to all the vehicles, Tow Truck Joe’s pup, Patch, a kitty who comes to lap up the spilled milk, and a cookie loving pigeon are also featured in the story. Together they all pitch in to keep the town running smoothly.

Verdict: This rhyming picture book will be a favorite at the library and in young classrooms. A great book for story time, it is even better read one on one when time can be spent looking at all the puns featured on town billboards and signs. With a theme of teamwork, it is a great book for little ears.