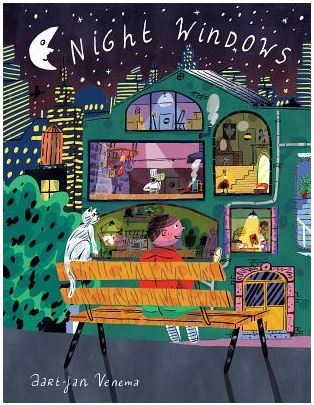 Lonely after his family’s move to a city, a boy seeks solace from what he perceives as an angry place by sitting outside his apartment building. At first, he thinks about running away but starts watching the people through the windows and sees “A writer, a cook, five kids/And – look! Here cats, a net/A sparkling chest, a girl who sews….” Each night he returns to his bench and sees more and more. His sojourn becomes less lonely as a cat perches on the back of the bench and the writer joins him to talk about his writer’s block. The boy’s surroundings become occupied by more people, and he ends up organizing a party. Highly detailed and quirky colorful illustrations come from the adventures of the illustrator from his everyday life in The Hague, Netherlands.

Verdict: Excellent pacing begins with a young person lost in new surroundings who makes a home for himself by observing and accepting the diversity of people around him. Following the action from one two-page spread to another can give hours of delight.